All images in header used under license from istockphoto.com Background by Florian Carli Mastodon
Posted on December 11, 2010March 14, 2012 by Ankaret Wells 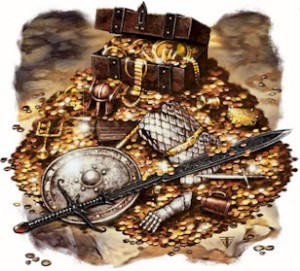 and really enjoying it.

Part of this is because it’s full of descriptions of clothing. But most of it is that I am hugely attracted to reading about cobbled-together, makeshift societies, and to the details of trade webs and burial customs and all the stuff that makes societies what they are. Fleming gives a lot of details about that kind of thing and has an amazing gift for connecting with the people behind the cist burials and the repurposed pots.

I am fascinated by the idea of a group of people moving to a hill-fort in the early fifth century, some of them old enough to have memories of what it was like to shop in a Roman marketplace and put coins in the hands of the buried dead, and some of them young and resentful and not seeing any point in hanging on to Roman ways, and others just determined to keep the tin mines open. I am also fascinated by the idea of a hereditary group of soldiers, the great-grandchildren of the last legionaries, arguing over whether to take protection money from the local farmers or just leave them to go their own damn way. And then there are the people arriving in boats from the north, accompanied by two children and a pig, with their grandmother’s brooches holding their cloak on their shoulders, who just want somewhere to settle and farm.

Would I write about any of those people? Well, no. I don’t do historicals – I get hung up on research, and also I have a bit of a mental block about novels set in Ancient Rome or fantasy versions of it. I just irrationally tend to dislike them. I’m not sure why. At least two different people have tried to get me to read the Falco books and I’ve bounced off them. I think it’s that I’m tensed up expecting that at any moment someone will eat a dormouse or convert to Christianity and get gruesomely martyred.

Would I write something inspired by them? At some point, almost certainly.

The thing with fantasy is that for it to work, there has to be a core of believability about the people and their culture, to give the reader something to brace herself against while she imagines the dragons or the demon-slayers or whatever. (Incidentally, I think this is something that a lot of non-genre readers fundamentally don’t get. I know a lot of people who will happily read magical realism but won’t pick up anything with a castle on the cover, and I suspect that some of that is a mismatch of expectations – they think that the book with the castle on the cover is going to be nothing but unrestrained, illogical flights of fancy without even the fig leaf of a real-world setting. Of course, it’s perfectly reasonable not to like fantasy, and I’m not saying anyone should read it who doesn’t want to – just that if you don’t read it and think you know about it, it might not be quite as you expect).

And in the meantime, I’m really enjoying Britain After Rome. It does what really good books do: it gives you a world to explore, and through that, tells you more about the world you’re actually living in.

3 thoughts on “Britain After Rome”