All images in header used under license from istockphoto.com Background by Florian Carli 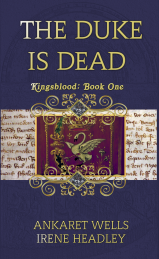 Read an excerpt from The Duke Is Dead:

The waterfront tavern in Montroulez was called the Duke’s Head.  An oversized lump of carved wood swung from a bar over the low door, casting giant-sized shadows of lips and nose against the walls.  Whoever the Duke in question was, it looked as if someone had lopped him off roughly at the neck.

The remains of the rain were awash in the street.  A cold wind skulked around the houses, ruffling the waters in the moonlight.  Rain dripped off Nicolas’ hood.  Blanzflor picked his feet up in high-bred disgust at the things that were floating by.

“Maybe I should just throw myself in the sea and freeze to death,” Nicolas muttered, “and have done with it.”

A frown filled the space between the curly hair that still colonised at least the sides of Morcant’s brow, and the drooping red moustaches and sideburns that grew enthusiastically below it.  “You’re no tougher than a veal-lamb.  When I was your age, I was fighting for my brother the true King.”

“When I was his age, I’d borne and lost two children,” said Alysoun, stamping her feet in the fast-flowing muck as she held the horses.

Morcant continued to glare.  A raindrop slid off the end of his nose.   “It would have been better if you’d had the chance to be a soldier.”

“Better for who?” said Nicolas. “My brother Adam was a soldier, and look what happened to him.”

“Your brother was a killer, and so are you.”

“Oh, stop grumbling.” Nicolas flexed the wrist of his sword arm.  Wet leather rubbed against his skin.  “I’m my mother’s son. You’re lucky I wasn’t born with fangs and a tail.”

“You were born with a tail.  Sir Gavin Rokeby chopped it off and threw it on the fire,” said Alysoun.  “Your uncle told me all about it.”

“I’m a killer, he’s a liar and we both rob the dead,” said Nicolas. “It’s a good thing we’re expecting a priest.”

The tavern door crashed open.  A burly figure in a reeking woollen cape reeled through it, shouting imprecations in Cavend which the rest of the inn’s patrons, being Boisseulons, did not understand.  He slammed into Alysoun, who screwed up her face with disgust.  Someone threw a broken clay jug after him.

He came to a halt staring up at Morcant with an expression of cross-eyed fury.  His pate was bald, his eyebrows were grey and bristled like dead thorn bushes, and a large scar decorated his neck.

Father Geraint explained himself in florid Cavend.  Alysoun blew out air over her teeth.  “What’s he saying?”

“No captain willing to cross the Watersleeve in this weather,” said Morcant resignedly.  “The best he could find was passage down the coast to Viderdam.”

Nicolas would willingly have paid the passage to Hell just to get warm again.  “The Free City? That’s not so bad,” he said, blowing on his fingers.  “It gets us out of Boisseul, at least.”

“And into Bergomance,” said Morcant dourly.  “Where Gaston Thunderbolt would pick a fight with an arming-dummy if he thought it was looking at him, and is married to King Roald’s sister besides.”

“Which sister?” said Alysoun.  “The one who killed her first husband, or the one who ran off and married a sellsword?”

Alysoun blinked and shook her head.  “One of these days when I’ve got a flagon of wine by me and a fireside to warm my feet, you’re going to have to explain once and for all who around the Dykosm wants you dead and why.  I lose count.”

“Well, it began with the theft of the Great Bull of Calvelly by Rhodri Crouchback, which made Rhodri’s cousin Owain of Bleith go traitorously to the King of Northaldria, and offer to show him the pass through…” Morcant began obligingly.

The story of the rights and wrongs of the theft of the Great Bull of Calvelly could go on all night, or in the case of bardic festivals, all week. “It’s not like we’re going to the Thunderbolt’s court at Briège,” Nicolas interrupted.  “Or to wherever it is he’s making war this time.   Viderdam has banks.  I like places with banks.  It’s easy to find someone who understands how the world works.”

Morcant crossed his arms and looked dourer than ever.  “How the world works, he says.”

From inside the tavern came the unmistakeable slurred chanting of a group of drunk men urging one of their number to do something.  A yellow-haired boy with bad teeth came crashing out through the door and landed with a splash in the road as he tackled Father Geraint around the ankles.  Father Geraint picked him up by his collar, threw him back into the tavern, and explained himself in the language of the poets.

Morcant cocked his head and listened.  “Everyone in the tavern’s drinking the Duke of Wharram’s health because they think he’s going to marry one of the Duke’s daughters.”

“Which one’s Wharram?” said Alysoun.  “One of King Roald’s sons?”

“One of his brothers.”

“And how is any of this related to Owain Bloodynose stealing a goat?”

“It was a bull,” said Morcant hurtly.

“If this boat Father Geraint’s found us has anything in the way of wooden sides to keep the wind out, let’s go and find it,” interrupted Nicolas.  “I’m frozen.”

“Sides, he says.  He knows as much about ships as he does about horses,” said Morcant, casting a long look back at the tavern.  “Your uncle the true King might have knighted you when you were fourteen years old, but you have a lot to learn, Nicolas ás Ithel.”

Nicolas waved a hand at him.  “I’ll learn it in Viderdam.  Father Geraint, when I last spoke to you about my investments in black cloth…”

Another raindrop rolled off Morcant’s nose and into the stiff tangle of his moustache.  He looked at Alysoun.  She shrugged.  The town bell began to ring, calling the curfew.

Clouds skittered over the moon and dappled the choppy water that rose up against the docks.  A storm was coming.